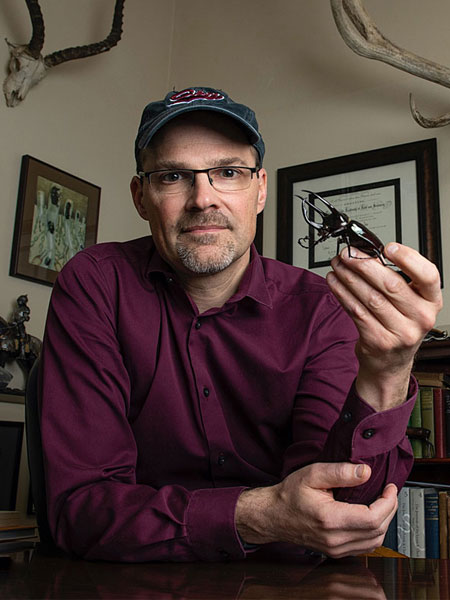 Doug Emlen, Ph.D., Montana Regents Professor of Biology at the University of Montana, is an evolutionary biologist, acclaimed author, and expert in animal weaponry. His book “Animal Weapons: The Evolution of Battle” won the Phi Beta Kappa science book of the year award in 2015, and his textbook “Evolution: Making Sense of Life” (co-authored with award-winning journalist and previous UAB Darwin Day guest speaker Carl Zimmer) is presently adopted by more than 250 universities and colleges. His research has been featured in The New York Times, National Public Radio’s Fresh Air and Science Friday, and YouTube’s SciShow, and he recently starred in documentaries about his work on BBC (Nature’s Wildest Weapons) and NOVA (Extreme Animal Weapons).

In this lecture, Dr. Emlen will discuss the science behind the stunning, extreme weapons we see in the animal world–teeth and horns and claws–and what they can tell us about the way humans develop and use arms and other weapons.

This virtual event is open to the public.